The first time I met Bobbi was at the Asia Contemporary Art Fair. At that time she was one of the participating artists at the event, and I was just one of the thousands of visitors, but unexpectedly we became friends after keeping in touch for a period, and lately, she became a mentor of mine by unreservedly sharing her thoughts and some good reads with me, inspiring me from time to time. I called Bobbi one chilly morning when I was visiting in New York, the day before Christmas Day last year, because that’s just the way I am; I don’t believe in planning; thus my trip in NYC was subsequently quite rushed and I thus predicted she would be busy spending time with her family during the Christmas holiday as all Americans do. Surprisingly, I was told that she was supposed to be in India with her boyfriend, but she cancelled the trip as she didn’t feel well and decided on staying at home. So, she asked me to come visit her to have dinner together.

When I first visited Bobbi’s place, it totally looked like a studio with her art pieces hanging on the walls and I had a chance to appreciate her artworks again while she was making dinner for me. I felt extraordinarily warm on such chilly Christmas Eve and had never imagined I would be spending such an amazing Christmas Eve in a New Yorker’s apartment and in NYC. Oh my gosh! So then, I started the “interview” (it was just a casual conversation of course) with her during our dinner. 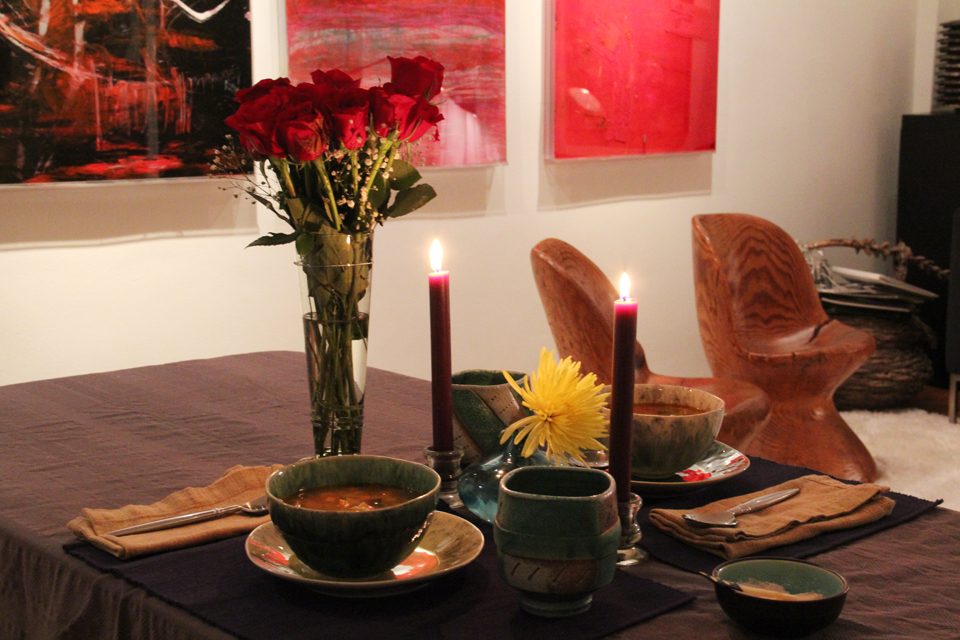 Cynthia Lo:  Hi Bobbi. It’s a great honour for me to meet you in New York. To be honest, I never imagined I would have a chance to spend a Christmas Eve with you at your place in New York, which is  just marvelous! I knew you were a businesswoman before and now have become an artist, and painter. Could you briefly talk about your background for the people who don’t know about you?

Bobbi Van: I have had a very rich and varied background and most of my decisions were based on intuition of what was best for me in the moment. I started out working for a well-known criminal attorney, F. Lee Bailey, and worked on high profile cases i.e. the Boston Strangler, Dr. Sam Sheppard, the Brinks Mail Robbery case.  I did investigative work and interviewed key individuals in various cases. Upon leaving Boston, I traveled for a period of time and then moved to New York where I worked for Women’s Wear Daily, a fashion trade newspaper and then was part of the start up marketing/advertising team of W for 5 years. I became a specialist in start ups in the publishing world and launched a new number of magazines for the next 8 years. 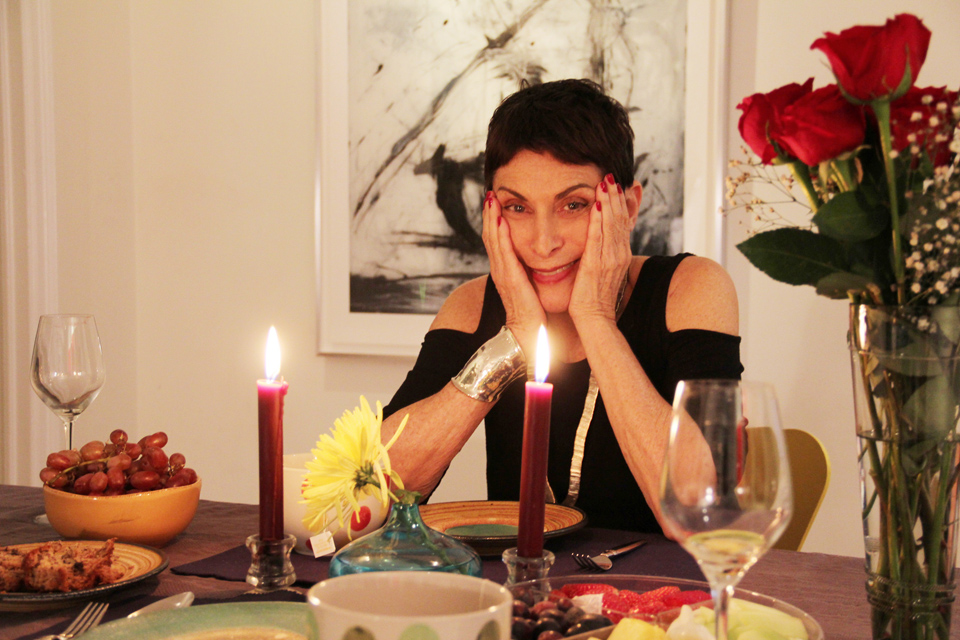 Bobbi Van: Along the way, I became interested in documentary work and produced a series of “Living Legends” as well as “To Bear Witness” the life of Valerie Furth, a holocaust survivor.  The Jewish Museum offered the film to school around the world so children would not forget. I also became an agent for projects and people with great ideas but didn’t have the resources to make it happen.  I worked in South Africa and the Middle East with partners to implement many projects.

Cynthia Lo: When and why did you decide to start painting? And could you describe in your words your particular style of artwork?

Bobbi Van: About 15 years ago I became a painter…it was another intuitive moment…a studio was offered through an art organization I belong to (I have been a collector for over 30 years) and I spontaneously decided to go into silence and paint for the 3-month opportunity. That 3 month studio extended to 5 years and I worked full time with great joy and many challenges…My work began selling through a dealer who was representing me and I am still working as a painter with great joy! I started working reverse on plexiglas (persplex) by accident. My first experience was on canvas but I found the process to be limiting for me and I was given a piece of plexiglas  (persplex) to experiment with. I loved it…it talked to me…I could work unfettered, bold and wild…I loved the way light changed the experience of being with my art. 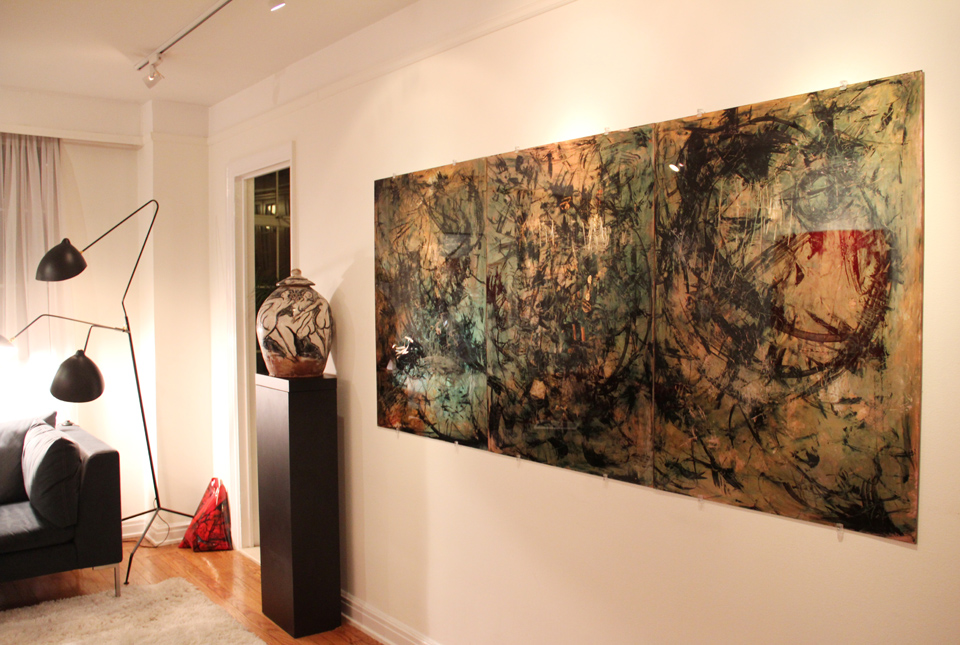 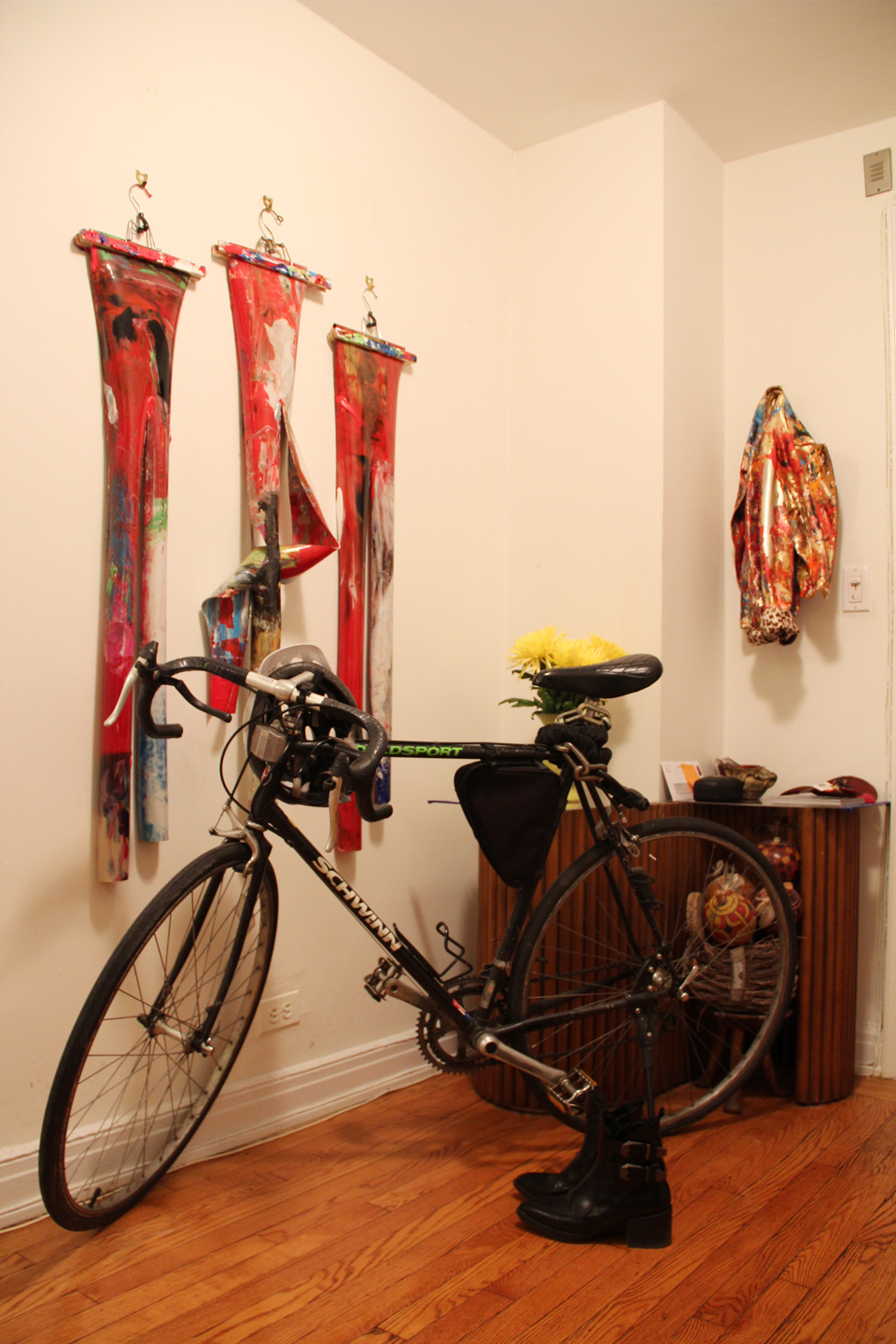 Cynthia Lo: What were you expecting from creating initially? Have you found what you wanted from painting? And what is that specifically?

Bobbi Van: When I initially started painting I was exploring my inner life…what was I experiencing…who was this person who needed to go beyond her business head and live breathe and experience creativity on a deeper level. By going into silence, I didn’t have any pressure on me to talk to anyone…respond to any conversations…just see what was inside and what needed to come out.I took it all in and just stayed present to my feelings and my work…trusting my intuition and lettingmyself be enveloped with whatever came out. It’s almost like reliving your life all over again as youlet your mind float and experience yourself anew. 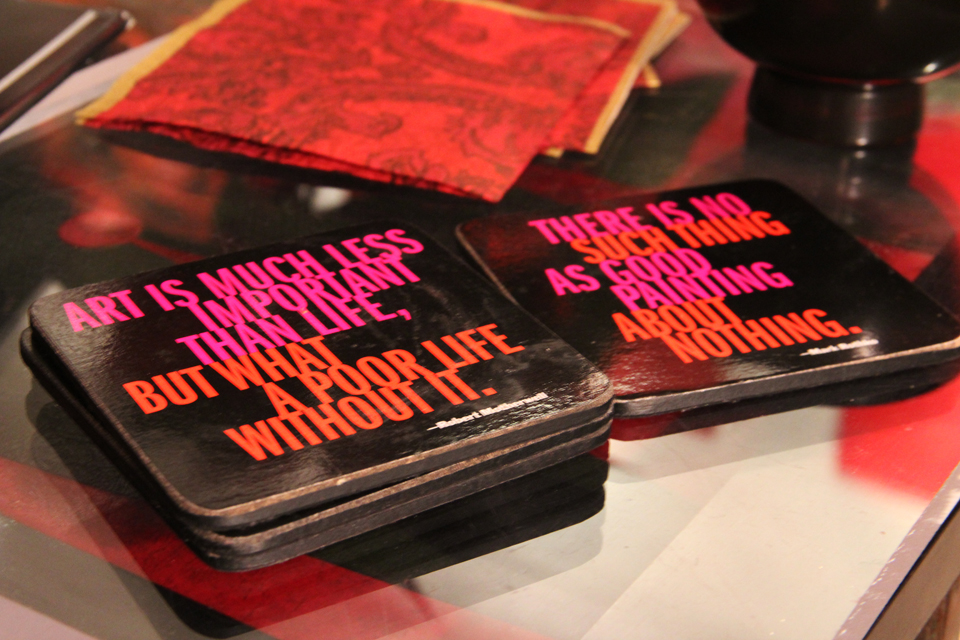 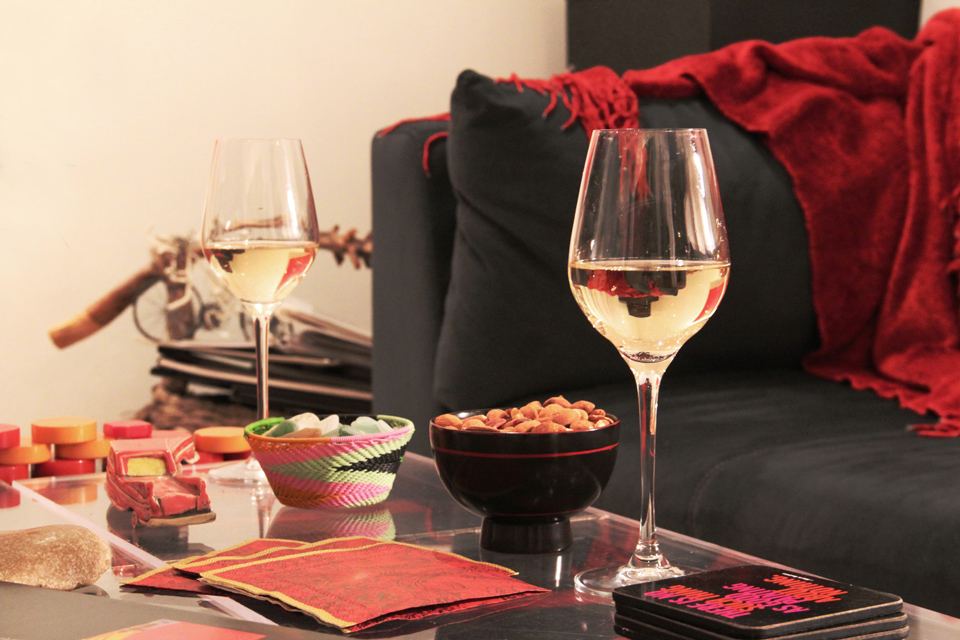 Cynthia Lo: You’re such an amazing lady who always shows kindness and generosity to people. As a personal friend of yours, I really know how great you are. I wonder what keeps you always in such a joyful and positive spirit; could you share the secret with me?

Bobbi Van: I truly believe that LIFE HAPPENS FOR US…do you remember the poem by RUMI “The Guest House”…it truly inspired me to trust that what ever happens, it is a jumping off to another journey.Rilke also inspired me… when I wanted to have all the answers but couldn’t make it happen fast enough. 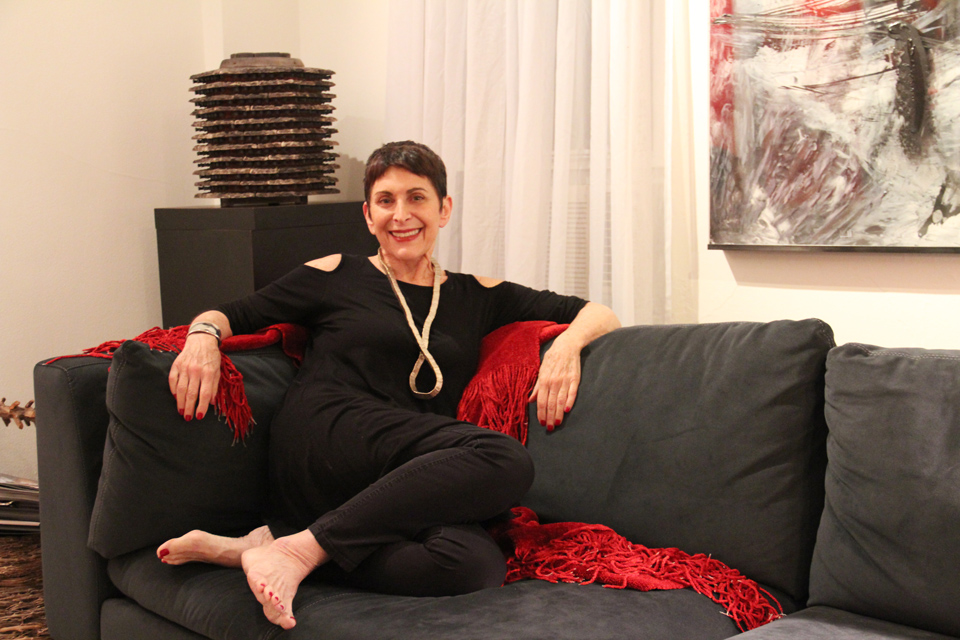 Bobbi Van: I am optimistic by nature…always look at the best in someone and try not to make unfair judgments as it stops the flow of intimacy.  I was truly touched in South Africa when I was walking to visit a friend who was going to die within the month and the Zulu women who would pass me would say SAWUBONA…I SEE YOU and the other Zulu women who they had greeted would say NGIKHONA I am here! Those words simplified and allowed me to let my friend die how she wanted to die and not how I wanted her to pass over. She taught me so much in how she lived and died that there isn’t a day that goes by that I don’t think of her. Our friendship of 40 years was very special…

Cynthia Lo: I saw your family photos on your fridge when you were cooking for me in the kitchen. Would you mind sharing a bit about your family? Did they support your decision to become an artist? Are any of your family members also doing the same thing?

Bobbi Van: My family consisted on 3 daughters (I am the oldest) and two very devoted and loving parents. They were not college educated and never really had a great connection to culture or the arts. It was survival for many of those years and they focused more on our being safe and loved than inspiring us to be creative. My youngest sister is a collage artist living in the wine country of California close to San Francisco and is also an extraordinary cook. She sees light and colour with everything she does. My younger sister has been in the healing arts for 18 years and lives in Massachusetts. All our creativity came from within…silence and thought and poetry and conversations inspired me throughout my life.

Cynthia Lo: Could you tell me your artwork schedule for this year? Do you have any solo or art shows coming up? Or any future plans?

Bobbi Van: I also am the Curator/Facilitator of the TEDx talks in NYC and it has been a very rich and rewarding experience.Right now, I do not have any shows on the horizon. I have been focusing on introducing my art through Studio visits that allows both myself and the collector a way of getting to know me, understanding how I think and process my work. I find that once someone has bought a painting from me, the relationship does grow and we work together in inspiring each other. 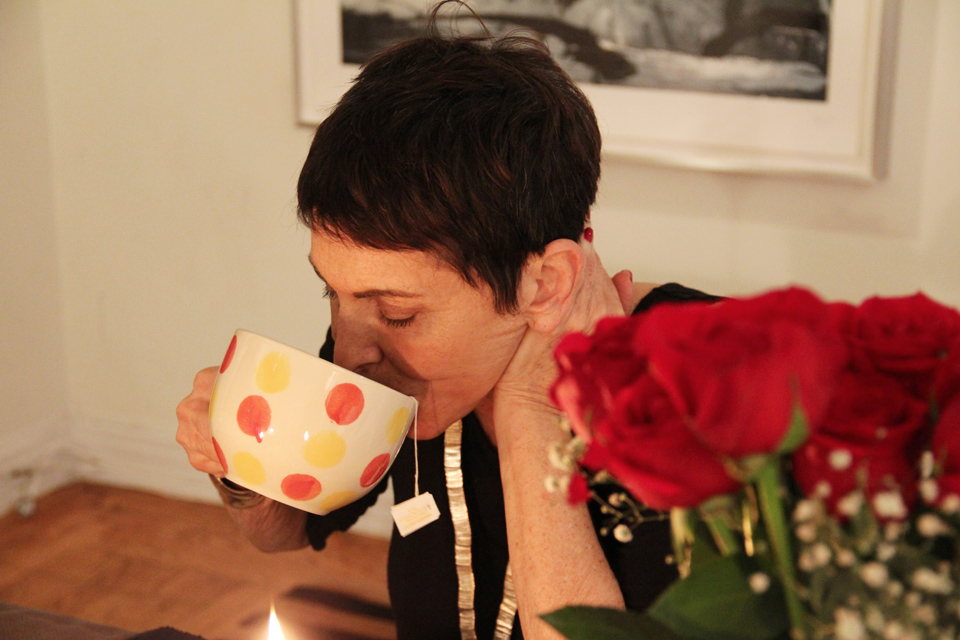 Cynthia Lo: Would you say that painting is your calling? Is there anything else you want to try in your lifetime?

Bobbi Van: I like to think of my creativity on many levels…painting, engaging people to connect with each other, inspiring people to open their lives to see their potential and to live out loud so their voice is heard. For many years, I have worked with young teenagers who had been abused or violated and have not thought of themselves as creative. My heart sings when they break through by exploring themselves as artists. We talk, we paint, we write and we laugh and cry as the real artist comes through. I don’t know what is next…I live in the NOW and let life guide me…Hopefully what inspires me will be shown so I can live and be with the people I love and the work that I am guided to do. 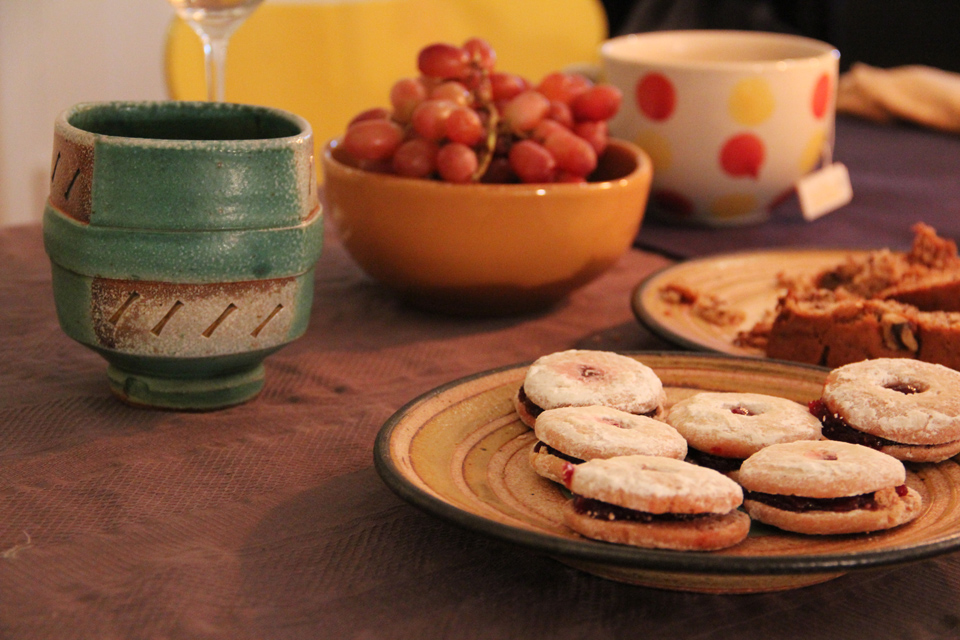 “I will never forget the magic of both of us being OPEN to step into such a wonderful evening…thank you for all the goodies and most importantly, your willingness to say YES and come visit.” The message I got from Bobbi after I visited her and it was pretty much all I wanted to say to her. Bobbi, thank you for such a wonderful and unforgettable Christmas Eve, we will see each soon.

For more information about Bobbi and her artworks please visit Bobbi Van Studio.